The soldier was killed late on Friday night after the Yemeni army and allied Ansarullah fighters launched rockets at three military bases in Najran.

Also on Friday, the Yemeni forces blew up a military tower and fired rockets at a military base in the southwestern Saudi province of Jizan.

This is while Saudi Arabia continues relentless airstrikes against various areas in the war-torn Yemen.

Saudi fighter jets hit an airbase near the international airport in the Yemeni capital Sana’a on Friday.

Earlier in the day, loyalists of Yemen’s fugitive former president, Abd Rabbuh Mansour Hadi, claimed that they have taken the southwestern Yemeni city of Aden from Ansarullah fighters and their allies.

Witnesses say clashes are continuing in the central parts of the city, with Ansarullah fighters still in control of some districts. Hadi’s loyalists began operations to seize Aden on Tuesday. The city has seen fierce fighting in the past four months.

Reports emerged on Friday that Saudi Arabia has sent Special Forces into Yemen under the pretext of escorting some fugitive former Yemeni officials back into its southern neighbor, in another violation of Yemen’s sovereignty.

The forces, which numbered 50, accompanied the officials on their way from the Saudi capital Riyadh into Aden, the Arabic language Bawabatii news website said.

Hadi, along with the cabinet of the former Yemeni prime minister, Khaled Bahah, stepped down in January.

On February 21, he escaped house arrest in Sana’a and fled to his hometown Aden, where he withdrew his resignation and highlighted his intention to resume duties. He later fled the port city to Saudi Arabia.

The Saudi regime launched its military aggression against Yemen on March 26 – without a United Nations mandate – in a bid to undermine the Ansarullah movement and to restore power to Hadi, a staunch ally of Riyadh.

Over 3,800 people, including more than 1,600 civilians, have been killed over the past three months in Yemen, according to the United Nations. Some local sources put the number of the dead at 4,500. 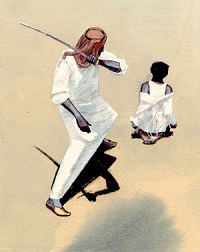